Maybe I am a doormat. But I just can't hold a grudge. It slips through my fingers like sand. It's like trying to sculpt something out of a bucket of water. Even when I really, really focus, I just *can't*.

All of those people, if they called me up and said "I need you" could be sure that I would just ask where, what, how soon?

I'm ok with that. I'd rather be that person than the one clinging to grudges. Life's too short. We don't know how long we'll have each other. I just don't have the time or energy to play that way. Why waste that time?

Maybe I'm wrong. I don't think so though.

My grandmother was Catholic, I'm certainly not, but I've always loved this poem. Kind of sums up my entire philosophy on life, and love, and how to treat one another. As far as such summations go, I would venture to say one could do worse. The italicized part is my favorite.


O Divine Master, grant that I may not so much seek
to be consoled as to console;
to be understood as to understand;
to be loved as to love.
For it is in giving that we receive;
it is in pardoning that we are pardoned;
and it is in dying that we are born to eternal life

G'night kittens
Posted by Cortney at 10:47 PM No comments:

Thanks Ethics Class, I still Think About You

It's difficult for me to understand those who think that life is a zero sum game. Either I win and you lose, or you lose and I win. Everything has a neat little answer. Everything is either right or wrong, no exceptions. There are hard and fast rules, that are consistent in every situation, no matter what.

One thing I've learned, in my admittedly short 26 years here, is that things are rarely, if ever that simple. It makes it easier to believe that things are that simple, because then life is way less scary- you have all the answers, congratulations! To me, this blanket absolutist ethical framework is quite scary- it allows for no evaluation of individual circumstance, of exceptions. And this is where people will say, hey, for some things, it *is* right or wrong, yes or no- when it comes to killing people, stealing, or lying they say.

But actually, sorry, guys, even then not really- we sanction killing in all kinds of ways. I know people who think war is a crime. People who think it's necessary, and not even killing. People who think it's ok to kill someone if they're stealing your T.V., people who are against the death penalty in all cases. People who think abortion is always murder, sometimes murder, maybe not murder, not murder at all. Most people would say that they would steal money if they had to buy food to feed their starving children, or just cut to the chase and shoplift it. Or back to murder, most say they'd kill someone to protect their children. If they were cold and homeless, they might sleep in places they weren't supposed to, maybe break into an abandoned building, perhaps start illegal fires to keep warm. There is a classical ethical dilemma exercise in so many intro to psychology classes, the plight of the poor man who can either steal the medicine he can't afford, or watch his lovely wife die. People are consistently split on that one. Or, ok, honesty. Really, are any of us *completely* honest? Do we tell our friends they need to lose weight? When our grandmother works hours making a sweater that we will never, ever wear, do we look into her beaming face on Christmas morning and tell her as much?

Even our hard and fast rules have little bends and loopholes in them. And hard and fast rules vary wildly across cultures, countries, and social classes. Acting like this isn't true doesn't make that fact go away. But acting like it isn't true does have a benefit- it allows us to judge others for not following our own interpretations and applications of hard and fast rules, or to be unable to understand the specifics that led them to slip into a gray area. I guess, for some people, that's convenient, safe, predictable. To me it's just judgmental and shortsighted. But that's just me. And some people would say that my view is judgmental and shortsighted. And that's ok, since I don't believe in hard and fast rules ;)
Posted by Cortney at 6:31 AM No comments:

Summer, you are everything I hoped you'd be and more. Thanks for all the opportunities and good times you've thrown my way so far. Let's keep it up :)

I think Regina says it best: 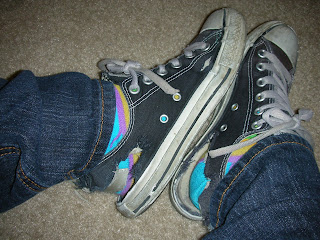 So these are my old shoes. I got them in October of '06. I had been home from Japan for a month and a half. I'd driven all over the western United States with Mel, and she'd come home to Dallas on that trip. We were both living with Marti and Dad. We were unemployed. I had begun to receive some arduous communications. We were kind of depressed, the two of us ladies. And my shoes were full of holes from walking all over Japan. And Mel had no sweaters, as she had lived in California for the previous 6 months. So Marti took us out, and got us shoes and sweaters, respectively. I wear my Cons 355 days out of the year, so considering it's been three years of such abuse, these look pretty good. But Marti told me that once more she was going to buy me shoes without holes... 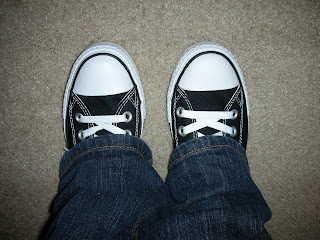 So here they are. Shiny. New. Way to bright way and dark black. I don't trust them. They're stiff as well. I just have to remind myself that what started off looking like this ^ 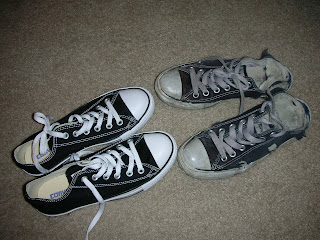 Will eventually fade to the beautiful, comfy specimen you see on the right. 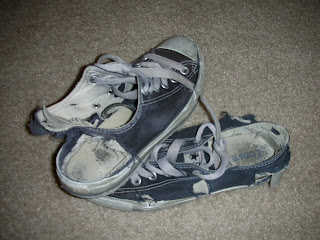 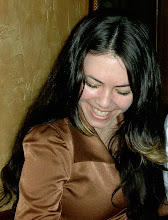